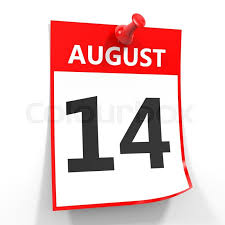 1824 General Lafayette returns to US.

1842 Second Seminole War declared over by Colonel Worth; Indians go on to be removed from Florida to Oklahoma.

1861 Martial Law is declared at St Louis, Missouri, due to pro-secession sentiment which surged throughout Missouri after the Battle of Wilson’s Creek.

1862 Abraham Lincoln receives the first group of African Americans to confer with a US president.

1908 The first beauty contest is held in Folkestone, England.

1911 United States Senate leaders begin to rotate the office of President pro tempore (for the time being) of the Senate among leading candidates to fill the vacancy left by William P. Frye’s death.

2013 638 people are killed in violent clashes between police and protesters across Egypt
2015 Most extensive face transplant surgery ever performed on Patrick Hardison by Dr. Eduardo Rodriguez at New York University Langone Medical Center.

2017 US President Donald Trump condemns racist violence at the White House after criticism of his earlier response to Charlottesville violence.

Go Back To The Top


E-9JA MUSIC OF THE WEEK

E-9JA VIDEO OF THE WEEK

Watch Here
Looking for something? Search below