« Think You Are A Computer Guru? These Shortcuts Will Make You Feel Like A Learner (SEE) | BREAKING NEWS: Atiku Wins PDP Presidential Ticket (See Result Details) » 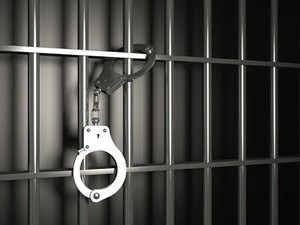 trouble with the law, Nigerian celebrities have always been seen as screen gods and role models in their respective professions in music or film.
Their lifestyles constantly set a pace for their fans to emulate. But what happens when role models become jailbirds?
Here on Naijaloaded, we’ve compile a list of 7 Nigerian celebrities who have been sentenced to prison.
Check them out below:-

In 2009, Ibinabo was charged for manslaughter and reckless driving after she accidentally killed a certain Giwa Suraj in 2006.
Fiwa Suraj was a medical doctor of the Lagos State Teaching Hospital.
On March 16, 2016, Ibinabo was sacked as President of the Actors Guild of Nigeria and sentenced to a 5-year jail term by a Federal High Court sitting in Lagos.
She was however granted bail in the sum of N2Million and two sureties in like sum.
On April 7, 2016 by a Court of Appeal in Lagos pending the determination of her appeal at the Supreme Court.

Rapper Babalola Falemi popularly known as Sinzu or Sause Kid has been jailed for two years in the United States for aggravated identity theft.
He was said to have stolen bank card numbers and identified information of their owners. Sinzu was said to have stolen over 15 bank cards.
He had encoded the bank numbers into blank cards and changed the account PINs.
He had withdrawn cash from ATMs with which he had bought goods from stores in the Idaho area, reports said.
Sinzu whose music career has taken a nosedive over the past years, was arrested as he was about to board a flight.
It was gathered the police found a card encoding device and more than $6000 on him.
This was the 3rd time reports would reveal he has been in police custody. In 2014 he was declared wanted for stealing $300 from a Supermarket ATM.
According to Idaho Statesman, the rapper was charged with conspiracy to commit bank fraud, eight counts each of bank fraud and aggravated identity theft, and possession of several fraudulent bank cards.
He pleaded guilty to one of the counts of aggravated identity theft after the other charges were dropped. He was jailed for two years for aggravated identity theft.
On Sunday, March 25, 2018, a video surfaced on Instagram, captioned “My bro is back!! SINZU”.

In 2007, Nollywood actor, Uche Odoputa, was also arrested with cocaine at the international airport in Lagos.
Unknown to many of his fans, the actor who was on his way to London was subsequently jailed for two years and three weeks in prison.
When he wasn’t getting any substantial movie roles, and when he could not afford to feed or house himself and his family.
Uche said he was open to the drug trafficking offer because he though he could drastically chnage his living conditions.
He said his major regret was letting his family down and allowing his London friends take advantage of his situation by talking him into the act.
In an interview he said “The late Amake Igwe paid part of my legal fees, she was always in contact with me and never abandoned me”.
Odoputa also acknowlegded the assistance he got from John Okafor, popularly known as Mr. Ibu while he was in prison.

Nigerian rapper Neyu Godwon Nyan had mocked fellow rapper and friend-turned-foe Sinzu after he was convicted.
However, a new viral post now indicates that rapper Godwon have been allegedly arrested for burglary while in the US back in 2009.
Word is he stole some items from the house which were eventually found in his car.
He was later arrested for ‘burglary of a habitation’ and locked up for three years.
His arrest was filed by a LeanAnne Klentzman back in 2009. Godwon regained his freedom in 2011.
In August 2011, he released ‘Evolution’. He did a remix of his single ‘Too much money’ featuring Sinzu (some called him Sauce Kid) and Ikechukwu.

On Friday 2 June 2017, Dammy Krane was arrested in the US reportedly for grand theft, credit card fraud and identity fraud.
In the days that followed more allegations were reported that he had used a stolen credit card to book a private jet from the company Tap Jets while in Miami.
The company had detected the alleged fraud due to discrepancies in the credit card information he had provided.
He was released from jail in Miami after meeting his bail conditions, set at $7,500.
He pleaded not guilty to the charges and demanded a trial by jury. The singer was assigned an attorney and wwas billed to appear in court on June 23, 2017.
His mother maintained the innocence of her son blaming his troubles on the show promoter that booked his flight ticket.
In August 2017, American courts struck out all charges including credit card forgery, armed conspiracy and grand theft filed against him.

The actress was reportedly arrested in USA for fraud. This report came shortly after Dammy Krane was arrested and detained in similar charges.
According to reports, the Yoruba actress had suspicious amounts of money wired into her bank account.
She constantly withdrew the money thereby drawing the attention of detectives.
The actress was arrested after a strong surveillance was placed on her bank account.
However, the police took her in for further interrogations, and she has been in their custoday ever since.
There was no official report on the alleged card fraud by the Atlanta police, but the actress’ mugshot surfaced online.
Earlier this year, she was released and deported back to Nigeria.
Considering the gravity of her actions, the actress has decided to relocate to Ibadan from Lagos where she formerly resided.
Currently the actress is maintaining a low profile as she is yet to attend any public function.

In 2005, actress Rabi Ismaila, was convicted of murder and sentenced to death by hanging for murdering her boyfriend.
She was said to have lured him to the Tiga Dam for a picnic, where she poisoned his chocolate before proceeding to drown his body.
Rabi, was convicted and sentenced but escaped the prison she was been held in 2012.
Rabi Ismail, also known as Rabi Cecilia was later rearrested last year, 2017.
The End!!!

Which Among The Above Listed Celebrities Is Your Favourite?

« Think You Are A Computer Guru? These Shortcuts Will Make You Feel Like A Learner (SEE) | BREAKING NEWS: Atiku Wins PDP Presidential Ticket (See Result Details) »